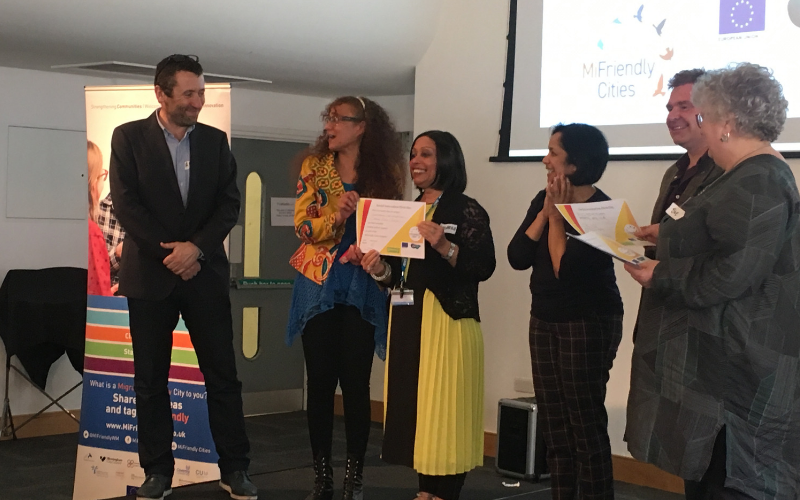 On Saturday 30 March, MiFriendly Cities held its Social Innovation Pitch Day in Birmingham, where a panel of judges and attendees from communities across the West Midlands region heard ideas for community projects from 16 migrant innovators.

MigrationWork, a non-profit consultancy agency specialising on issues of migration, worked with West Midlands’ residents born outside the UK to come up with ideas for projects to benefit the community and local residents – migrants and non-migrants alike.

The Pitch Day was the culmination of months of one-to-one development, starting with a series of workshops held by MigrationWork to inspire migrants to drive change in their communities, after which a call was made for applications to pitch for up to £5000 in funding.

Of 38 applications, 19 were selected according to the following criteria:

16 pitches went on to present to an expert panel of judges from across the public, private and voluntary sectors, all with specialist knowledge of the cities the projects would go on to support.

The panel of ‘friendly dragons’ were:

Successful pitches on the day received up to £5,000 funding and will get ongoing consultancy support from MigrationWork to get their ideas off the ground. A ‘people’s vote’ was held in order to grant an extra £1000 to the audience favourites.

Ideas ranged from a community book club providing creative activities for migrants and non-migrants alike to build confidence, to a project aimed at highlighting dangerous driving behaviours, to a ladies photography society to empower women from diverse communities.

Richard Williams from MigrationWork said: “Migrants have always helped build our communities. We are turbo charging the process so that the West Midlands gets the benefit of all that creativity, commitment and enthusiasm now rather than later“.

A series of briefings have been produced which give examples of projects from around Europe in the areas of health, housing, employment and active citizenship – priority areas identified by migrants in the West Midlands – to inspire ideas for more projects in the region. These are available to download from the MiFriendly Cities website.