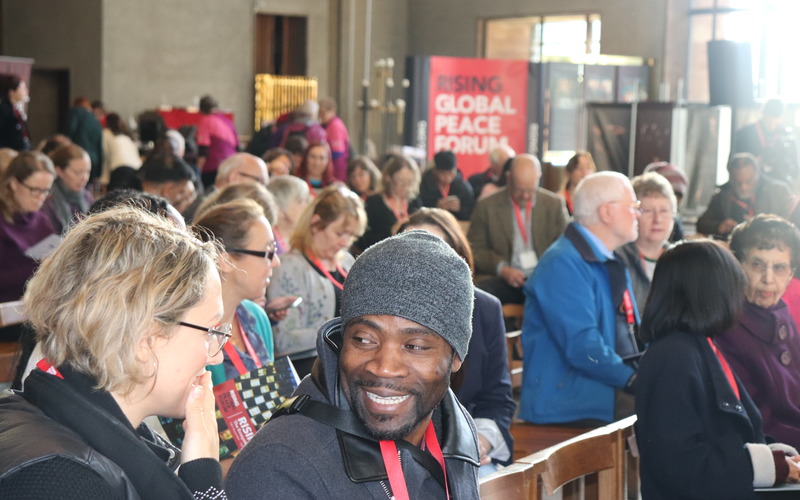 Migrant rights activist Ake Achi is using his lived experience to raise awareness of migrant labour exploitation and what needs to be done to improve the situation.

Whilst anyone can fall victim to labour exploitation, migrant communities are one of the most vulnerable groups due to the gaps between immigration and employment law. In the West Midlands, the MiFriendly Cities project has been working to empower migrant communities, supporting changemakers like Ake to inform and help individuals facing exploitation.

Growing up, Ake had been a child labourer in the Ivory Coast, working on farms with his family. He explains how there were no viable alternatives for families, and people did not question employer practices due to “fear of being fired, assaulted by authorities, or sent to prison”.

Moving to Europe as a child, he was interested in how, despite the law being a protective factor, many people still did not know their rights or question employers. He noted the lack of knowledge and the gap between immigration law and employment law as factors leaving migrant communities vulnerable to exploitation.

In the UK, it was this experience that inspired Ake to complete an International Relations degree and to go on to achieve a Master’s in International Human Rights Law. Since then, he has enrolled on an Employment Law course offered by the Chartered Institute of Legal Executives (CILEx). Ake has used his studies to support migrant communities in the UK, setting up his social innovation ‘Migrants at Work’.

Ake launched the ‘right to work’ campaign in 2009 and established ‘Migrants at Work’ in 2018 but struggled to help people to understand how the intersect between immigration and employment law could impact migrant communities adversely. He found organisations were reluctant to listen and, using his own money, he was limited with the work he could do. In 2019, Ake was happy to receive funding from the MiFriendly Cities project to help develop his social innovation project.

Ake was pleased to find that being supported by the MiFriendly Cities project opened several doors for ‘Migrants at Work’. He was able to pay more of his expenses and, for instance, meet stakeholders in person. He was formally introduced to organisations that he now found took his work more seriously as he was not “just some guy on his own”.

Since, Ake has been offering free legal advice to migrant communities through ‘Migrants at work’. He has also developed ‘WINK’ (What I Need to Know). ‘WINK’ teaches labour rights at the intersect between immigration and employment law to empower migrants in the community. The aim is to help migrants identify the signs of labour exploitation and challenge poor employment practices.

Ake has also established relationships with key organisations such as the Gangmasters and Labour Abuse Authority (GLAA), with whom he is tackling labour exploitation. He found that whilst the GLAA are addressing labour exploitation issues, it had not explored his angle about the intersect between employment and immigration law. The GLAA now offers him support with cases.

Ake’s hard work has helped him to support many migrant workers. One lady from the Windrush generation reached out to him explaining how she has indefinite leave to remain in the UK, something which she had usually proved by presenting her passport. However, the passport had expired and when the new one arrived, it did not show her indefinite leave to remain in the country. As a result, her employer had to suspend her without pay.

Although the client did in fact have leave to remain and thus the right to work, the online checks that employers use do not give further advice if you tick ‘no’ to passport evidence. It simply advises employers that they may not be able to establish statutory defence against fines. As a result, employers often panic and wrongly suspend or dismiss migrants, or British workers from BAME backgrounds. This demonstrates one of the many ways that immigration law conflicts with employment law, making migrant groups and those who look or sounds like migrants vulnerable to labour exploitation and race discrimination.

With cases like this, Ake stresses that employers are not immigration experts and migrant communities should not necessarily take their word for it if they say they do not have the right to work. In the case above, the suspension left the individual vulnerable to becoming a victim of questionable employment practice, as she may have been forced to find other work to pay her bills because employers do not recognise the documents. Fortunately, with Ake’s advice and representation, she was able to prove her right to work, was reinstated and even offered a pay rise.

Brexit has further complicated the context for migrant workers. Ake has been able to raise awareness of the EU settlement scheme amongst vulnerable groups that often do not know how to access support. European Union (EU) and European Economic Area (EEA) migrants must apply to this scheme to continue to live legally in the UK beyond 30 June 2021. It protects their rights to health care, benefits and pensions, to name just a few. Nonetheless, the application is complicated and bureaucratic, and support from organisations such as Migrants at Work is vital in clarifying the requirements and overcoming challenges such as language barriers.

With his work experiencing higher demand since lockdown, Ake has partnered with the Central England Law Centre (CELC) to run weekly online surgeries. Together, a CELC representative and Ake provide advice, whilst discussing relevant immigration laws and speaking with clients on an individual basis. The surgery has helped those who encounter issues related to their right to work, their immigration status and access to public funds.

Looking to the future, Ake will continue to expand on the relationships he has established through the MiFriendly Cities project. He has been working closely with the European Commission delegation in the UK as part of the European Rights Group, a working group with representatives from 27 EU countries and community groups. This has provided him with a platform to raise his concerns about the impact of immigration and employment law and the political context on EU and EEA families.

As well as continuing to work with the GLAA, Migrants at Work will partner with Refugee Action and Coventry University’s Centre for Peace, Trust and Social Relations to deliver training to front line migrant support organisations and local businesses in 2021. This will help raise awareness of migrant rights and immigration processes.

It is clear that ‘Migrants at Work’ has contributed to raised awareness of labour exploitation in the UK but Ake recognises there’s still a long way to go. With the International Organisation for Migration and The African Regional Organisation of the International Trade Union Confederation recently taking an interest in his project, the future undoubtably holds many more opportunities for Ake to support migrant communities beyond the end of MiFriendly Cities in 2021.

You can find ‘Migrants at Work’ on Twitter here: https://twitter.com/migrantsatwork.

If you would like advice relating to any of the issues outlined above, please email the Project Coordinator, Anuja, at migrantsatworkltd@gmail.com.