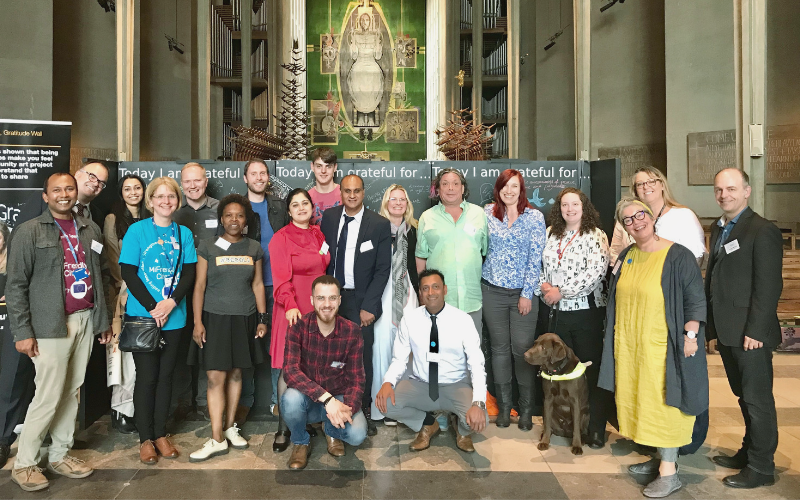 The UIA City of Coventry held its public launch for the MiFriendly Cities project at the city’s iconic cathedral on 5th June. The event was both a celebration of the project launching in the West Midlands, as well as an opportunity for the 11 partner organisations to engage with potential stakeholders and publicise the project more widely.

Representatives from a range of public, private and voluntary sector organisations from Coventry, Birmingham, and Wolverhampton attended the event, which saw a varied programme of speakers and performers take to the stage to highlight how migrants and refugees can help meet the region’s challenges.

The event was a significant milestone for the project, as it presented the first major opportunity for all 11 organisations involved to come together publicly and represent the project as an innovative partnership. It also received widespread media attention on the BBC, with local, regional and national coverage.

Sunariah Miraj, Programme Delivery Manager for Migration at Coventry City Council and MiFriendly Cities Project Coordinator, took to the stage to introduce the project to 200 people gathered in the cathedral, a symbol of the City’s status as UK City of peace and reconciliation.

She said: ‘’I am a migrant myself, and if I didn’t have the right support from other people in the City, I wouldn’t be where I am today.

He said: ”It’s a brilliant example of a team coming together from across the West Midlands … proving how we can genuinely take advantage of our diversity to create a community where everyone can thrive.”

In keeping with the innovative, community-led ethos of the project, refugee and migrant volunteers helped to coordinate the event, and also spoke on stage about their experiences of starting a new life in the West Midlands. Moving speeches from refugees Jihan Belal and Julia Kariuki, from Syria and Kenya respectively, highlighted the importance of being welcomed as newcomers as well as being supported to integrate and find employment.

Breakout sessions in 4 key areas of the ‘Migration Friendly’ project – Jobs, Skills, Citizens & Voices, and Start-ups & Innovative Ideas – followed the Main Stage programme, giving participants the opportunity to learn more about the project and find out how to get involved. Engaging with potential Stakeholders will be key to the success of the project, which aims to reach out to more than 2000 employers across the region a sign of the MiFriendly Cities project’s ambition.

Catering was provided by a social enterprise café, Arabian Bites, which supports newly arrived refugees from Iraq and Syria to learn new skills. The project itself will support the creation of up to 16 new social enterprises across the region.