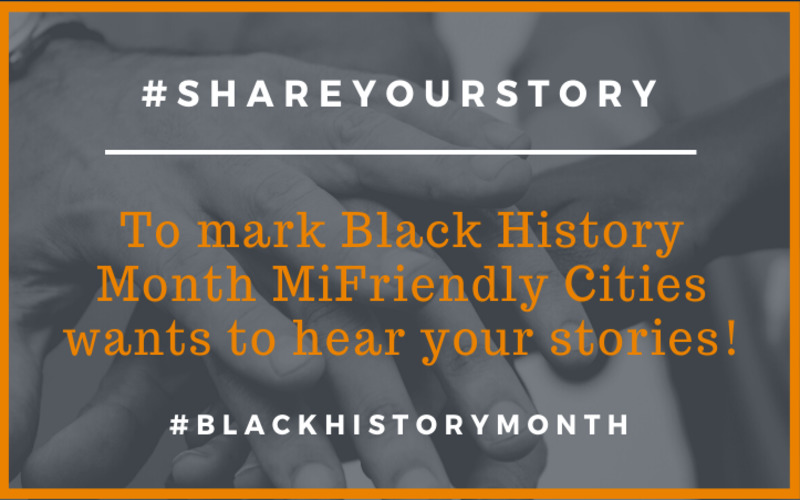 Faye had to overcome many obstacles to obtain refugee status, but her drive to learn and community-focused mindset has meant she is now able to help others, and is a stand-out participant in the MiFriendly Cities project. To mark Black History Month, she spoke to MiFriendly Cities about her struggles, how she overcame them and what we can do to support villages in East Africa.

Faye arrived in London, alone, in the freezing winter months of 2002. Seeking asylum in the UK, she knew nobody, and felt terrified in the sprawling capital city.

Unused to the cold climate, living in substandard accommodation and suffering both physically and mentally, Faye became seriously ill with pneumonia. With the help of the NHS she was cured, only to return home to the news that a woman she had befriended in her accommodation was moving to Leicester. Faye, not wanting to be left alone again, decided to embark on the journey with her friend.

In Leicester, Faye was supported by the Red Cross and another refugee charity to further her claim for asylum and access the National Asylum Seeker Support service (NASS).

Faye’s’ mother tongue is Swahili and whilst she could speak English, “it was rough”.  To help, a “brilliant legal adviser” registered her at Leicester College which she attended for 2 years, studying fulltime. She studied English for Speakers of Other languages (ESOL) and a vocational course in cake making.

By attending college and creating connections, she built a support network in Leicester and was understandably disheartened when the Home Office decided to move her to Manchester. Upon receiving the letter informing her the transfer was imminent she was frightened and depressed, fearing the upheaval of relocation again, and the lack of control in her life.

For the next 3 years Faye studied at college in Manchester, whilst continuing to fight for her asylum claim. She qualified with a diploma in English, a Distinction in cake making, and a City & Guild’s qualification in IT.

In 2007 she finally received the wonderful news that she had been awarded refugee status! Unfortunately, with the elation of refugee status came the reality of being evicted from NASS property, despite still waiting for the arrival of her legal documents. She then entered a battle with the bureaucracy of the Home office, trying to obtain her documents and ID, for over a year.

Even though she had been awarded refugee status which entitled her to public funds, due to a lack of documentation, she was unable to work, or claim benefits. She survived on charity: Barnardo’s, Acorns and Age Concern, where she also volunteered. She was in a ‘No Man’s Land’ and didn’t officially exist.

“I was a wreck, imagine one day you are somebody, the next day, nobody”

In 2008, Faye relocated to Birmingham because her best friend had a sister who lived there and encouraged Faye to come. An unhappy memory etched forever, was attending the Job Centre on a summer’s day.  The assistant who dealt with her claim was dismissive and unhelpful, and Faye was left hurt. She waited for 4 hours, only to be told that they couldn’t help her.  Undeterred, she returned to the Job Centre the following 3 days, finally meeting the manager.

The Job Centre manager listened to Faye’s complex story and contacted a solicitor. Together they were able to verify her ID. After 3 weeks she received a letter from the Home Office stating they had sent her ID documentation to her old address in Manchester!

Faye immediately borrowed some money and rushed North, terrified that someone would have discarded her long fought for ID.  She rushed to the agency responsible for the house. They produced a bag full of letters, and thankfully, there amongst the junk mail and envelopes, was her legal ID, proving her leave to remain.

With her legal documents in hand Faye could finally start her life.  Having a thirst for learning, she enrolled at City College on an access course for University. She achieved a place at the University of Birmingham where she graduated with a BA (Hons) in ‘Social Policy & Health Care’, going on to gain a master’s degree in ‘International Relations, Gender and Development.’

A fellow student encouraged Faye to attend a MiFriendly Cities introduction event. Faye was attracted to the project’s philosophy and became a participant of its Social Innovation programme.

With the support of MiFriendly Cities, Faye established ‘Ona Creations’ – an initiative selling beautifully crafted leather work made into decorative shoes/ handbags. She sources the leather from villages in Kenya and Tanzania, supporting women’s collectives that use the finance to send children to school, build wells, and most recently, establish a dispensary. As a result, MiFriendly Cities has enabled Faye to utilise her learning and education to build an imitative that supports gender equality, access to education and health care, internationally.

Like all businesses, COVID -19 has hit hard, with people spending less, especially on luxury craft items. However, Faye is making plans to relaunch towards the end of 2020. If you would like to support a local social innovation, you can find her on Instagram here.

On a local level, Faye has also trained as one of MiFriendly Cities’ voluntary Community Health Champions. Prospective champions are provided with qualified training so that they can disseminate information to their communities that may otherwise encounter barriers. The 5-day course has empowered Faye to inform her community about “ways to remain healthy” and to distribute leaflets with accurate medical information. She has even used her skills to support Birmingham’s Public Health department.

Faye meets regularly with other local Health Champions to discuss issues and share experiences. They are investigating establishing themselves as a Community Interest Company to enable a sustainable future when MiFriendly Cities comes to an end. They also attend Public Health webinars targeted at those who have a direct reach into communities and have an established, trusted relationship with them.  These webinars hope to improve community health and wellbeing and reduce their risk of becoming seriously ill with COVID-19.

Aside from her voluntary work, Faye works in Health & Social Care. She wants to study for a PhD and has ambitions to write a book about the struggles of people back in the villages that she helps through Ona Creations.

She is settled in Birmingham living with her family, and loves life here.

“Birmingham is my home, people in Birmingham are wonderful”

With her “you only live once” mantra, Faye is looking forward to life, and intends to carry on, growing and giving back.